Gillian Wearing at the Whitechapel Gallery 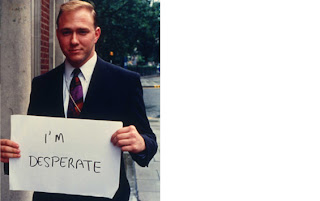 I was thinking today as I was reading Chris Mullin's diary covering 2005-2010 that Damien Hirst is like Tony Blair (or The Man as Mullin likes to call him) while Gillian Wearing is like Mullin - they're the kind of people who quietly get on with their business rather than worrying too much what people think about them. 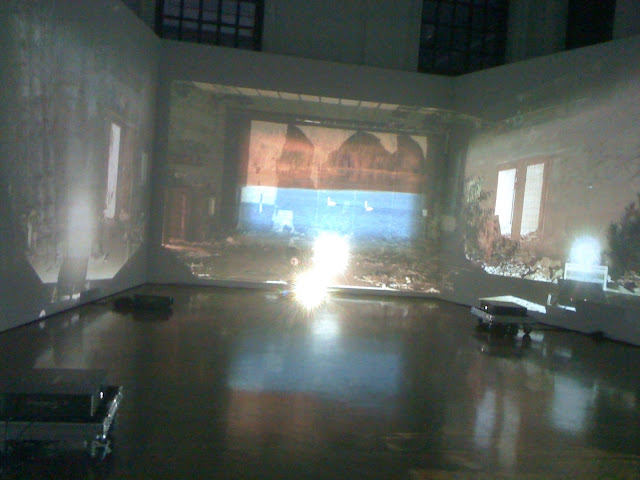 On a rare day off work [as a freelancer you take the work when it's there] I went to see three art shows in Central London. The choice of galleries was determined in a large part by proximity as I had a limited amount of time and galleries two and three were close by the one show I definitely wanted to see. As a criteria it seems as valid as any other.

The first show was Diana Thater: Chernobyl at Hauser and Wirth on Piccadilly. I only went in as I was passing but I like the way that the overlapping video projections montage themselves in the space that's been constructed for them. By placing the projectors in the space, cross-projecting so to speak it's almost impossible for the spectator to not be in the space of the work. I didn't really understand the work itself, the loaded title is hugely suggestive of some kind of meaning, but I loved the mix of static video shots and hand held travelling ones. This is taken from the press release I didn't read:


A new video installation by Diana Thater fills the interior of Hauser & Wirth's Piccadilly gallery with images of the post-nuclear landscape of Chernobyl. For this work, Thater spent time in the 'Zone of Alienation' which surrounds the site of the nuclear disaster, filming the eroded architecture and wildlife of the one-hundred mile wide radioactive territory. The animals she films have managed to survive amid the devastation of the only existing post-human landscape, demonstrating a wilderness of man's making. The installation focuses on the rare and endangered Przewalski's Horse. Once facing certain extinction in its native habitat in central Asia, this sub-species of the wild horse now roams freely in the 'Zone of Alienation'.


The desolate remains of an abandoned movie theatre in Prypiat, a city founded to house the Chernobyl nuclear plant workers, form the backdrop of Thater's installation. The city's decomposing architecture is juxtaposed against the footage of the wild animals living in the 'Zone of Alienation'. Through this installation, visitors experience a world where a man-made catastrophe has abruptly halted all progress and animals inhabit an irradiated landscape. Overlaying physical and filmic spaces, Thater confronts the successes of civilisation with its profound failure. 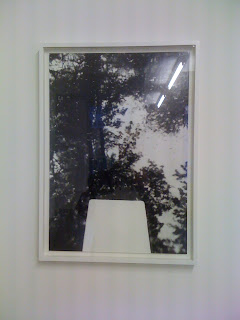 I think the show is actually better than the press release lets on. The second show was Bianca Brunner as 401 Contemporary in Mason's Yard which is the show I'd planned to see. There are lots of shows you can talk about and make them sound good, there are few shows that you go and see and they completely blow you away and at the end of it nothing really needs to [or perhaps can] be said. I admit that unless you saw the show or know Bianca Brunner's work then that isn't much help. The show mixes a few colour shots with black and white ones. Pithy, not usually a word seen in art show reviews, is probably the best description of seemingly simple images doing a lot. It's a difficulty the press release struggles with. So what would I say? Brunner's pictures make you aware of the act of looking at photographs, how it differs to the kind of seeing we do in our day to day lives abstracted from the ordinary and the tangible. There's an essay available from Brunner's website [Brian Dillon 'All That is Properly Perceived', Bianca Brunner, Gap in the Real, Published by Verlag Scheidegger & Spiess AG 2010] that may help or you'll just have to take it on trust. The work really is that good. This is my favourite [Bianca Brunner Sky, 2008, Silver Gelatin Print, 50 x 35 cm, Edition of 5 + 2 AP] from the show [my not very good camera phone pic will have to do until you get a chance to see it]:

The last show, just a brief mention, is the Mona Hatoum at White Cube Mason's Yard. I'd seen Hatoum's equally stunning piece at the Whitechapel the week before and the cumulative effect and the idea of the these pieces co-existing in different parts of London is something that really appeals to me. The works play with location in a way that's unique to installation and sculpture. 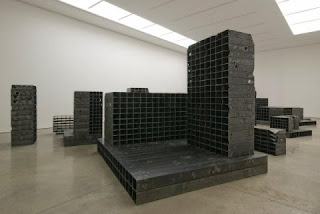 BTW, there's a piece on the ArtsDesk website that's talking about the Hatoum show but is how I felt about the Brunner show. In summary it's arguing that the twaddle that gets issued as the accompanying press release to shows like this does the art no favours draining the poetic space away from the viewer's relationship to the work. It's the reason I generally don't read them. Heading home on the tube I've taken a leaf out of Rockmother's book and started taking pictures of fellow travellers. This is Hipstamatic on the iPhone.

Even a klutz like me takes good pictures with Hipstamtic (sung to a 'fifties US TV jingle). Here's a picture of James Ellroy, one of my favourite authors. You decide.

Good Reads: The Big Sleep (or Le Grand Sommeil as Guillaume would call it)

The Big Sleep by Raymond Chandler


My rating: 4 of 5 stars
There's a very reasonable chance that any page of this book is better than the book you're currently reading. Genius.

So way only 4 stars instead of 5, you may ask? As I get older I'm less sure than I was that books can transcend the limitations of their genre. Crime is a great genre and this is a great book but it ain't Updike.

View all my reviews >>

Wednesday 26 May 2010: Toby Young is a Mitchell brother 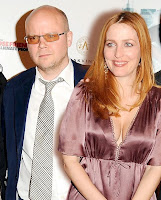 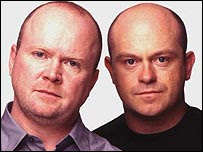 Arseholes. Fucking arseholes, fuck the lot of them.

Toby Young on last night's Newsnight looked like a Mitchell brother. I was going to say a posh Mitchell brother but I realised he looked worse than Grant, so like the middle one. Not the poshest but not the scumiest. No one does lowlife like Phil Mitchell.

Not today's link, yesterday's, and then it became last night's. The girls next door made it and brought it round. How good is that? I love my neighbours.

Moctezuma at the British Museum Probably not worth £12, worth £6. If you don't go, wait a bit. A lot of the best stuff (like these masks) are actually in the British Museum collection and will reappear there eventually.

I've been looking at my friend Maria's new fashion blog: fashionvfashion. She's been asking me for tips on how she should make it more search friendly as it doesn't show up in any search engines. We had a long conversation and then I realised she'd only just made it. I explained how Google's elves probably hadn't got round to looking at it as yet.

She has pics of Brooke Shields on her blog.

Went to a Q&A with Viggo Mortensen (well, I went with Yol actually) at Bafta last night. What a nice man! Generous in praise to his colleagues, thoughtful, self-deprecating. We're going to have a small Viggo Mortensen retrospective in his honour round at our place later this year.

Saw Tom Ford's quite amazing debut feature A Single Man at Bafta last night. It's based on a Christopher Isherwood story following a single day in the life of a lietrature literature professor at a Los Angeles university. The film's magical and most reminded me of Steve McQueen's Hunger and Julian Schnabel's Diving Bell and the Butterfly in that all three were made by non-directors who're hugely successful in their own fields. There are moments of real freshness of vision that it's hard to imagine them coming from a battle-hardened Hollywood director.

There was a Q&A with Colin Firth who plays the university professor and the director Tom Ford. Sadly it centred too much on the fact that it's Ford's first feature and the problems that might have created. When a film's this good you know it's no fluke and the result of a real determination and vision.

The other slightly irritating thing was the near constant returning to the idea of it being a gay story rather than one of loss, loneliness and how we might find redemption which far overshadows the sexuality of the cast. Similarly, there were several questions to Firth about a straight man playing a gay character and how that works. Er, he's an actor for fuck's sake - they pretend, it's what they do!

There was an interesting moment when in describing the fact that Nicholas Hoult's mohair jumper need Tom Ford's constant attention with hairspray to stop it fluffing up (fashion tip!) Colin Firth said something like "You can see from that Nicholas is very secure in his masculinity." What caught my attention is that he said "masculinity" when I think he perhaps meant "sexuality". So not "heterosexuality" versus "homosexuality", which is the usual binary opposition that is made, but one of "homosexuality" versus "masculinity". Does this mean that male homosexuals can't be masculine?

Finally the beautiful John Lautner house (more pics) that was used in the film is for sale.